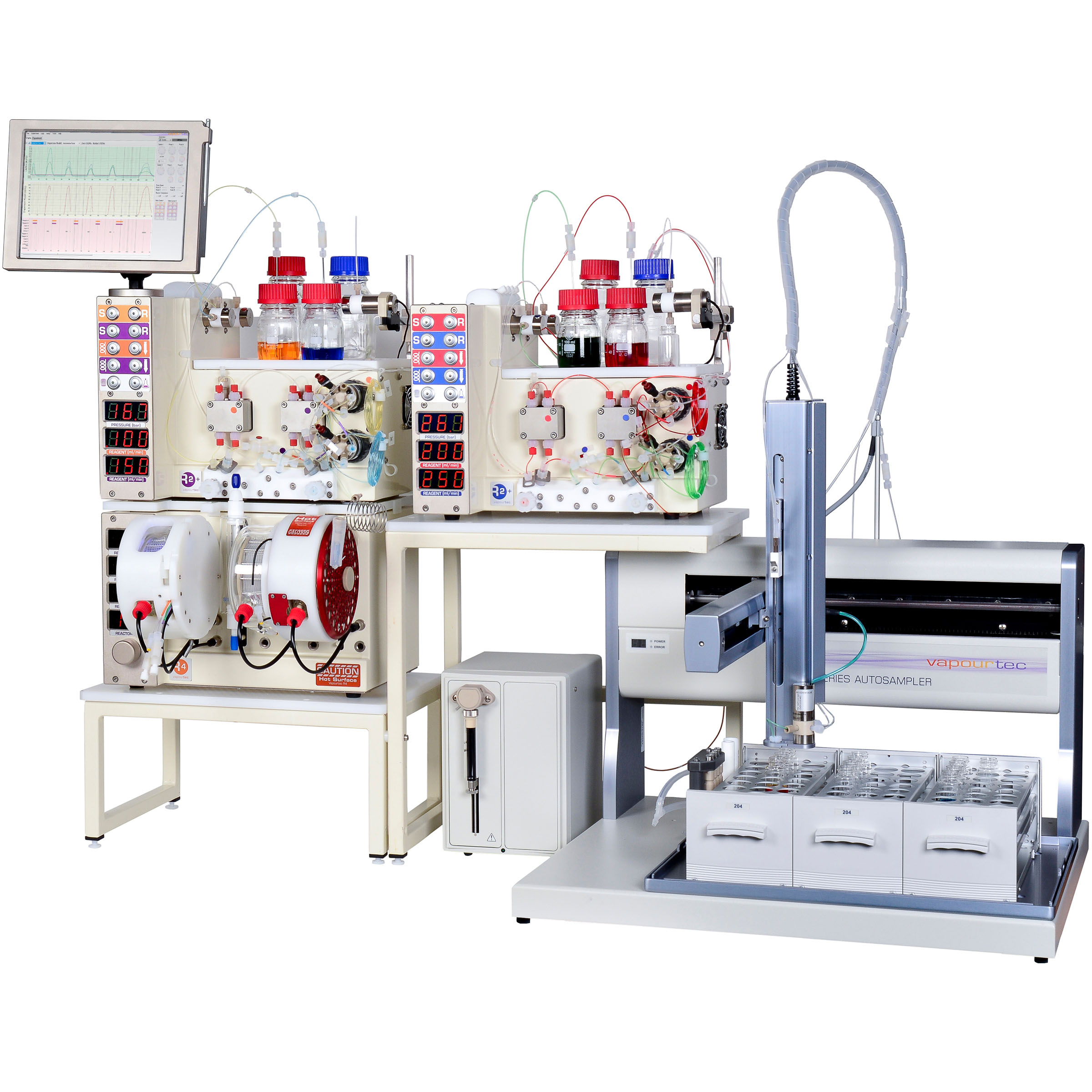 The R Series system already offers the facility for the reagents to be preloaded into “Sample Injection Loops” and then released into the flow at the correct moment as required (all controlled by the Flow Commander™ PC control software if required).

Vapourtec recently announced the capability for the sample loops to be preloaded from an autosampler. This means that the user can queue up a sequence of reactions with different starting reagents, giving the capability to generate automated arrays of compounds.

What are “Sample Injection Loops” ?

This facility has always been available on the Vapourtec R2+ pump module. With this, a set amount of sample can be preloaded into a loop of tubing which is not at that time connected in the flow. In the meantime, the pump for the reagent channel in question feeds system solvent through the reactor, as correct flow and temperature conditions are established. When the correct moment is reached, a valve switches and the sample loop is brought into the circuit, immediately after the pump and before the reactor. The “plug” of fluid in the sample loop is then pushed through the system by the solvent, and passes through the reactor.

Why use Sample Injection Loops ? 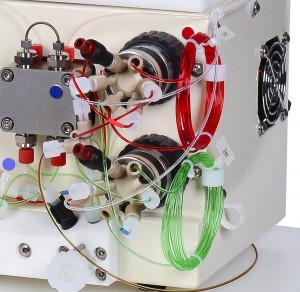 Up to now, there were two key reasons. The first is that the sample loop valves are compatible with certain mineral acids that the reagent pumps are not compatible with. This means that more aggressive reagents can be used in sample loops with no damage to the system.

Secondly, reagent efficiency. Although the Vapourtec system is designed to minimise this, there is still a small dead volume of reagent that can never be used when reagents are pumped from a bottle. Putting a valuable reagent in a sample loop ensures that it is all fed through the
reactor, and with the Flow Commander™ software this valuable quantity of reagent can be timed to coincide exactly with all other reagents in the reactor.

It is even possible to send isolated plugs of reagents through the system using a system “solvent” that is immiscible with the reagent, which means there is no dispersion at all and all of the products formed from the valuable reagent plugs can be captured.

There is now another great reason to use sample loops. With an auto sampler, it is possible to load the sample loops afresh before each reaction cycle, completely unattended. That means that any number of consecutive reactions may be carried out with different reagents every time.

In the schematic illustration below, a single reagent channel is supplied into the reactor. In practice, up to 4 channels can be used this way with one autosampler. (Where a reagent is common between all the reactions, it can be simply pumped from a bottle, of course). 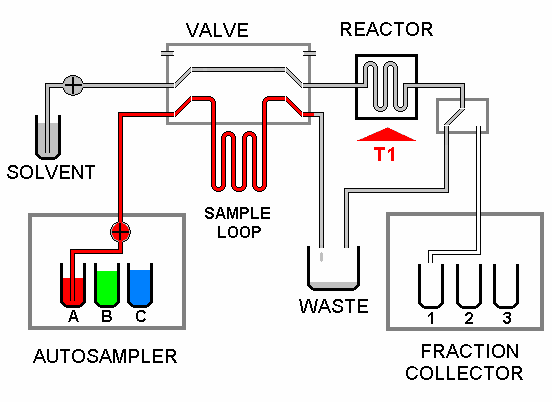 System pumps solvent through the reactor while the autosampler loads the reagent into the sample loop. 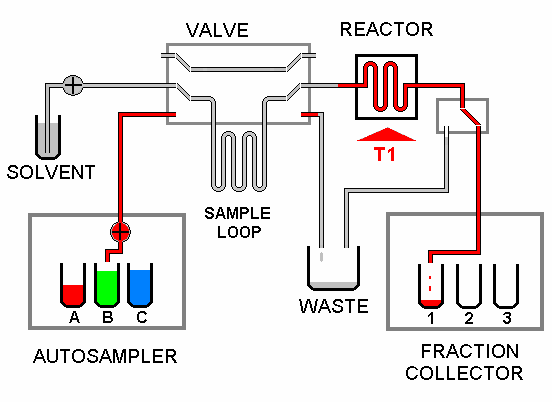 Sample loop is “switched in” to the main flow channel, and reagent is carried out of the sample loop and into the reactor by the flow of pumped solvent.

The reaction products are captured by the fraction collector when they emerge. 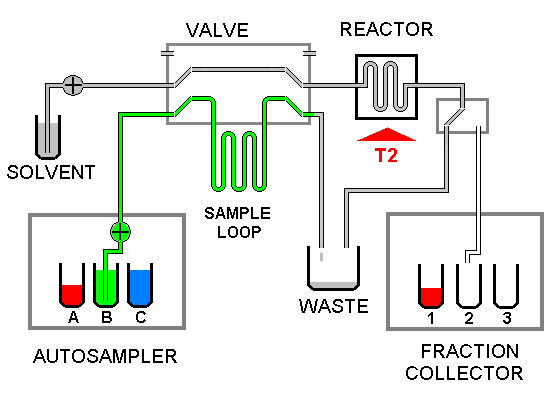 The whole process is repeated again, this time with the autosampler bringing in the next programmed reagent, while the reactor is set to the required temperature for the next reaction.

The whole sequence can be repeated as many times as required.

Use Reaction Products in Subsequent Reactions

In the photograph on the first page of this document, an autosampler is shown that both feeds reagents and also acts as a fraction collector for final reaction products. This means that products collected from one reaction can be used as reagents for subsequent reactions. What is required to use an autosampler ?

It also makes sense to have a fraction collector with this level of automation but this function may of course be offered by the autosampler. 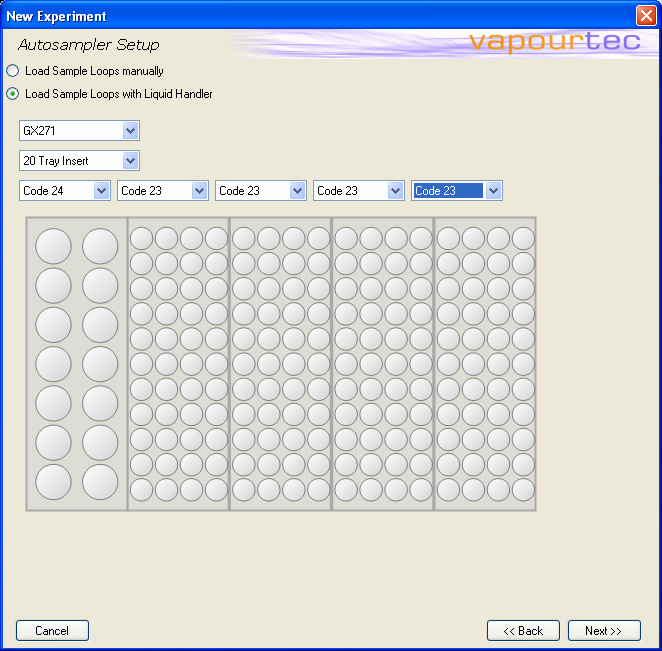 The flow commander software automates all of the operations and ensures exact timing of each reagent plug to arrive at the correct time. Each successive reaction can be set to take reagent(s) from a specific location in the auto sampler.

Typically reagents may be placed in the first rack and reaction products in the other racks.

Note, however, that reaction products may be re-used as reagents in subsequent steps. 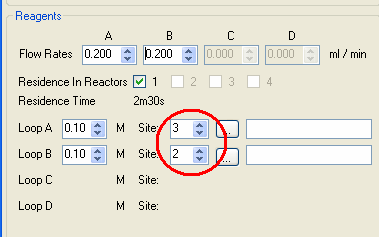 Once the experimental setup is defined, individual reactions can be queued up. For each reagent that is to be supplied by the autosampler, the bed location where that reagent can be found is specified.