Vapourtec’s static mixer tubular reactor for strong acid resistance and volumes up to 20ml. This is a demonstration of the reactor performance.

Selective hydrogenation using a slurry of Pd/C and hydrogen gas

At Vapourtec we have made use of our patented V-3 peristaltic pumps, and new pressure regulation mode to perform a continuous flow hydrogenation with a heterogeneous catalyst pumping as a slurry.

In this video, Ryan demonstrates the synthesis of nanoparticles of a spin-crossover coordination polymer using a procedure developed by the group of Prof. Chick Wilson at the University of Bath.

In this video, Ryan performs the biphasic oxidation of an aldehyde using methanol and sodium hypochlorite in the Vapourtec reactor for rapid mixing.

Find out more about Vapourtec Reactors 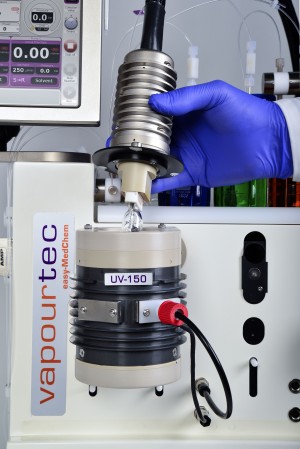 The Future of Photochemistry with Vapourtec’s UV-150