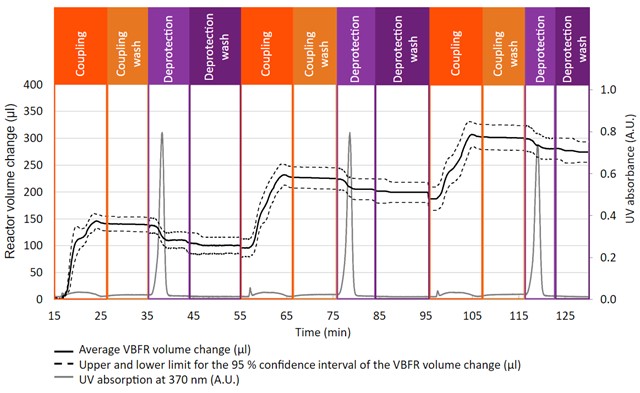 The team at Vapourtec have published the article entitled “Evaluation of unexpected protecting group removal in solid phase peptide synthesis – quantified using continuous flow methods” [1] in the Journal of Peptide Science, which evaluates the Fmoc deprotections caused by the solvent itself during synthesis.

Solid-phase peptide synthesis (SPPS) is a chemical strategy used to build peptides on a solid support. By repeating a coupling/deprotection cycle, an activated Fmoc protected amino acid forms an amide bond with a free amine group bound to the solid support. Then, the Fmoc group is selectively deprotected using piperidine, allowing to repeat the cycle and add more amino acids, until the peptide is built.

Evaluating the success rate of the coupling and deprotection can be extremely challenging in batch. Traditionally, UV-Vis spectroscopy has been the preferred analytical tool, as it can follow the Fmoc chromophore over time. Unfortunately, the most common solvent for SPPS is DMF, which also absorbs in the region Fmoc is followed. DMF obstructs the measurement of lower concentrations of Fmoc, making the results imprecise.

Since Vapourtec launched the Variable Bed Flow Reactor (VBFR), continuous flow-SPPS (CF-SPPS) has benefited from its features. As the resin is held in place at constant packing density, the reactor is always kept as its minimum volume. This provides three key benefits for CF-SPPS:

1.       Channelling of reagents is eliminated

2.      Solvent usage for washing is reduced

Duncan Guthrie, Director of Vapourtec commented: “We are delighted our work was published in the Journal of Peptide Science. One of the advantages of flow chemistry is the ease of connectivity with inline analysis. For continuous flow SPPS (CF-SPPS), we quickly realised UV-Vis spectroscopy was not accurate enough to measure subtle changes during the synthesis, but the volume change recorded by the VBFR has excellent precision and is highly repeatable.

We typically run CF-SPPS at ~80oC, as this reduces the cycle time to ~10 min. At this temperature we noticed Fmoc was being deprotected by residual dimethylamine in DMF, so we started to investigate the extent of the unexpected deprotection, and most importantly, how to prevent it. Thanks to the VBFR, we could quantify the rate at which Fmoc was deprotected by different solvents at different temperatures. For example, Arginine is a difficult amino acid to couple, and often requires of a double coupling strategy. In this case, if there is an extended solvent wash between couplings, it can create an addition impurity which will have an extra arginine.

The work we undertook helped us to optimise our CF-SPPS protocol, which now gives us excellent results with just 2-3 equivalents of amino acid. We also wanted to publish our findings because we hope they will help other peptide chemists with their work in either flow or batch.

Since the European Union implemented restrictions in the use of DMF, there has been a renewed interest in green SPPS. One of the problems of green solvents in batch SPPS is the difference in swelling.

Our next area of research is focused on developing continuous flow-SPPS techniques using less hazardous and greener, solvent system. Essentially, SPPS without the use of DMF. Initial work suggests deprotections and couplings are best run in different solvents. The best combination of solvents will be investigated by relying on the variable bed flow reactor (VBFR) to quantify the extent of resin solvation during the coupling and deprotection cycle. Once candidate solvents have been selected, these will be “tested” by synthesising sequences known to be challenging due to aggregation and analysing crude purity. Thanks to the VBFR we can evaluate the level of swelling whilst keeping the resin packed at constant packing density, which minimises the required wash solvent to transition between coupling and deprotection.” 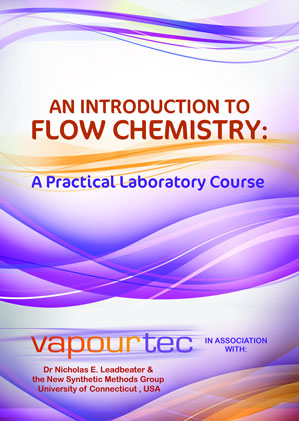