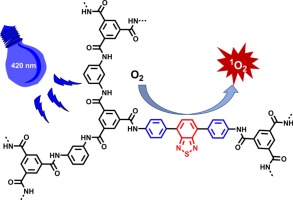 A photoactive benzothiadiazole (BT) based monomer was developed and used in the synthesis of typical polyamide (PA) polymers. The monomer was incorporated in different percentages within the PA backbone of the polymers and their photosensitising ability was tested in different media and conditions. Photochemical experiments in a commercial flow reactor under aerobic conditions showed that the polymers had increased efficiency in singlet oxygen generation compared to the original photoactive monomer. When suspended in aqueous solutions, these materials demonstrated superior photostability towards long-term exposure to light and chemical stability in a wide-range of pH environments. The photoactive polymers were highly capable of degrading two well-known wastewater contaminants, bisphenol A (BPA) and cimetidine, as well as inactivating the waterborne parasite Cryptosporidium. Given the simplicity of the synthetic preparation of the polymers, the absence of metals and their photoactivity under visible light, herein we show that these materials are very promising for simultaneous decontamination and disinfection of water.