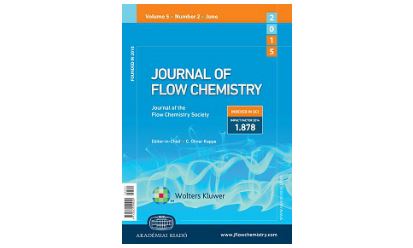 Flow chemistry (FC) has been studied extensively because of its advantages, such as precise controllability of process variables and superior mass and heat transfer, as well as process automation for obtaining autonomous chemical synthesis platforms. In this study, FC was utilized to fabricate bulky tirethoxysilane-modified Disperse Red 1 chromophore (TES-DR1) that showed electro-optic (EO) activity. The product yield of TES-DR1 was only 35% using the traditional batch method. By contrast, a significant product yield of 95% was obtained using the proposed FC system in which the reaction could be performed at temperatures above the boiling point of the solvent, providing sufficient energy for accelerating the reaction. Study of reaction kinetics revealed that the reaction mechanism was altered in the high-temperature region. During hybridization, the TES-DR1 was well-dispersed and chemically fixed in the organic–inorganic hybrid matrix composed of SiO2 and polymethylmethacrylate modified with tetramethyl orthosilicate. With the subsequent electric-field poling process, the chromophores were aligned uniaxially in response to the applied electric field, leading to EO behavior. The r33 value of the polymeric EO material is normally decreased at the glass transition temperature because the polymer matrix in the rubbery state allows the chromophores to move randomly. However, the average r33 value representing EO activity remained stable at 14.67 pm/V after the thermal stability test performed at 225 °C. Therefore, TES-DR1 was bound and confined to the stable hybrid framework, restricting chromophore movement at high temperatures.